Japanese Workforce Statistics 2022: Digging Into the Labor Market of Japan

Find in This Article

Until recently, the labor market in Japan was very different from the labor market in the United States. The traditional Japanese employment structure is characterized by two major forces—the “simultaneous recruiting of new graduates” and the “ranking hierarchy.”

These two influences create a working culture that encourages lifetime employment and long-term development. Firms tend to hire batches of new college graduates who will stay with the company for a long time, developing broad, firm-specific skills as they work their way into senior positions with higher pay.

The Japanese job market changed significantly after the Japanese asset price bubble burst in 1991, as Japan shifted toward US regulation and capitalism. Today, Japanese firms incorporate American practices, including performance-based pay increases and non-regular employment like part-time, seasonal, and contract-based.

Another crucial influence on the job market in Japan is the demographic makeup of the country. Japan’s population skews older, and their birthrate has been low in recent history.

So, how do these factors affect the Japanese workforce? Let’s dig into some statistics to find out.

Japan has a population of about 125 million people, and the number has been steadily declining since the early 2000s. How many of those people actively participate in the labor market? What do the projections for the Japanese workforce look like for the next ten years? How does the workforce of Japan compare to the workforces of other similar-sized countries? The answers to these questions can be found below.

In Japan, labor market figures for 2021 show that 68.6 million people were employed, down from 68.7 million people in 2020. This accounts for approximately half of the population of Japan. Despite the country’s aging population, the labor force increased by more than half a million people between 2000 and 2020.

Historically, Japan has been inhospitable to foreign workers as many of its citizens prefer to maintain ethnic homogeneity. However, with the average age of the workforce increasing, Japan introduced a law allowing for more foreign workers in 2019, and by late 2020, foreign employees made up about 2.5% of Japan’s total working population.

3. The manufacturing industry accounts for the largest percentage of Japan’s foreign workforce.

4. The average annual wage of a Japanese employee is about 4.4 million yen.

When analyzing the global average hourly wage, Japan is on the lower end of the spectrum—between 800 and 930 yen per hour. This works out to about $8 per hour. In 2021, the Japanese average hourly wage was increased by 28 yen, which was the largest increase in years. Annually, the average Japanese employee takes home around $35,000.

5. The Japanese broadcasting industry is experiencing the country’s greatest shortage of full-time employees.

6. More than 53% of businesses in Japan view cultivating human resources as the best way to counter labor shortages.

According to Japan’s labor market trends, 2022 will most likely see the labor shortage continue. This reflects American sentiment—in the United States, 46% of job seekers state that company culture is important to them, company culture statistics show. Moreover, approximately 30 percent of companies opt for employing foreign workers.

7. The retail and wholesale industry employs 10.6 million people in Japan.

In Japan, employment by industry statistics show that people employed in the retail and wholesale industry represent about 20% of the total employed population. The industry that employs the next highest percentage of the population is manufacturing, with 10.4 million employed people.

8. Japan’s unemployment rate has steadily decreased by about 2.5% since 2002. 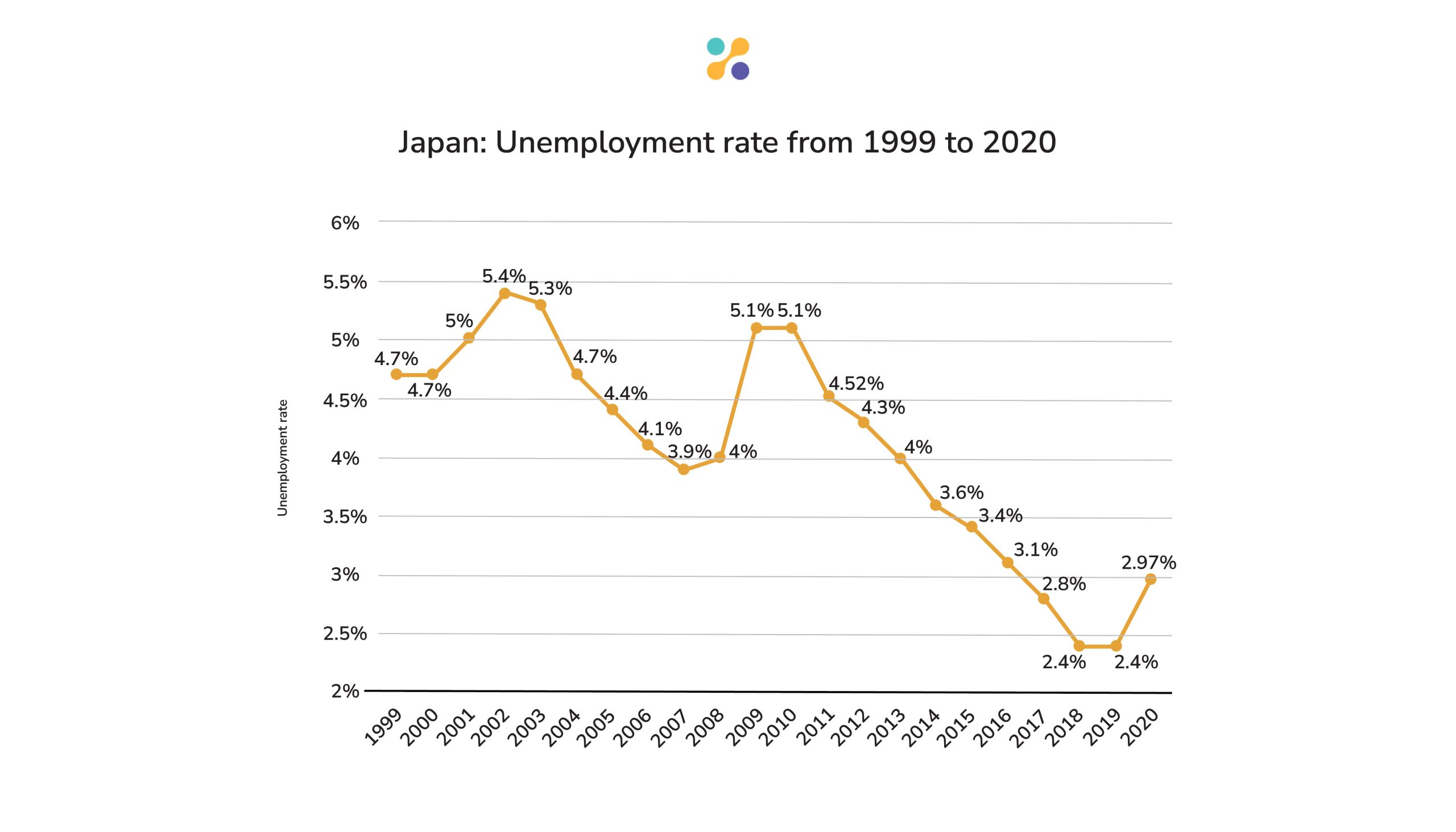 The ratio of job openings to applicants is an indicator of not only the unemployment rate but also the labor force participation rate. In Japan, employment statistics indicate that this ratio may be decreasing. It stood at 1.55 in 2019, which is a decrease from 1.62 in 2018.

The unemployment rate is low compared to other major industrial countries. This may be due to the country’s incredibly strong work ethic and encouragement of company loyalty and long-term career growth. The country’s attitude toward work has been a major contributing factor to its economic growth since WWII.

Many people in Japan work beyond the set retirement age of 65. This is due to many factors. Japan’s population that boomed after WWII is aging, with over a quarter of the population over the age of 65. This is mainly due to falling fertility rates, as Japanese women choose to have fewer children and have them later in life. Additionally, Japan’s cultural attitude toward work rewards long-term employment and encourages employees to remain with the same company for a long time.

11. People aged 45–54 make up the largest portion of the Japanese workforce.

In Japan, the labor force participation rate among middle-aged people is high. In fact, about 16.3 million people between the ages of 45 and 54 participate in the labor force. This accounts for about 25% of the entire workforce and is the largest age group actively employed in the country.

12. About 76% of Japanese employees aged 65 and older have non-regular employment.

However, this restriction does not include motion picture production and theatrical performances, according to Japan’s Constitution.

Children under the age of 18 can be engaged in light labor, provided that it’s not harmful or dangerous.

Employment rates in Japan show that the workforce will shrink by one-fifth in the next 20 years. Many years of declining birth rates in Japan and subsequently aging population mean that about 12 million people will become too old to work by 2040.

Statistics About Gender: Is Gender Inequality Prominent in Japan Workforce

Japanese women have been encouraged to enter the workforce in the last few decades. However, this increase in the number of women in the labor force hasn’t necessarily translated to better pay or better opportunities for women, meaning that sexism in most of Japan’s workplaces still exists.

15. The female employment rate in Japan is around 52%.

According to Japanese demographic data, the female employment rate in Japan rose in 2021, up from 46.2% in 2012. Japan has faced a severe labor shortage in the last ten years, prompting leaders to encourage women to participate actively in the job market. Simultaneously, the male employment rate has risen to nearly 70%.

16. Over 50% of female employees in Japan are in irregular employment.

For Japanese women, finding full-time employment may be more difficult than it is for their male peers. More than half of female workers hold part-time, temporary, or seasonal positions, compared to just 22% of Japanese men.

In Japan, workforce statistics indicate that women who attain some form of higher education are more likely to find employment than those who don’t. In 2020, only 0.1% of those who graduated from lower secondary education found employment.

18. Women make up just under half of Japan’s total labor force.

Out of the 68.7 million people that made up Japan’s labor force in 2020, 30.4 million were women and 38.2 million were men. According to women in the workforce statistics, this is slightly higher than the average global percentage of female employees, which is about 47.7%.

Japan’s population has been declining as the current workforce ages into retirement, and fewer women opt to have children. Because of its aging population, Japan is currently facing a labor shortage, which is the primary factor that influences current workforce statistics in Japan. Labor shortages encouraged women to move into the workforce and foreign employees have been welcomed into the job market. For the labor force in Japan, 2022 will be another year when they’ll see these trends continue to shift away from historical norms.

Japanese workforce culture has been shifting for the last few decades as the country adopts more Western business practices, including part-time, contract, and seasonal employment. So far, older people and women have taken these roles more than young men, and it remains to be seen whether these practices will ultimately benefit or harm Japanese employees.

What is the largest labor force in Japan?

In terms of demographics, the largest labor force in Japan is made up of people aged 45–54 who account for about a quarter of all employed people. Men make up a larger portion of the labor force than women, with 38.2 million men and 30.4 million women employed.

What percentage of Japan’s population is employed?

Japan’s population has about 125 million people. Out of these, around 68.7 million people are employed. This means that about 54% of the population works. This percentage is higher than it is in most other major industrial countries because a large number of older people continue to work past retirement age and the unemployment rate is very low.

The Japanese workforce predominantly consists of middle-aged and male workers. Although the number of women in the workforce has increased in the last few decades, men still make up a larger percentage of the employed population than women (about 55% of the workforce is male and 44% is female). More than 25% of the population is older than 45.