Veterans in the Workforce Statistics: Employment Rate, Demographics, and Salary in 2022

Find in This Article

Finding employment after service can be challenging for both veterans who served in the military. Transitioning from military work and adapting to civilian life can be a long process, during which a lot of veterans remain unemployed.

To show you the current veteran employment rates, we have compiled a set of the latest statistics regarding veterans in the workforce. You will also learn about veteran demographics and find out more about veteran average salary, as well as what are some of the difficulties veterans face when seeking employment.

The unemployment rate of veterans gradually decreased over the last several years. Unfortunately, due to the COVID-19 pandemic, a lot of employees lost their jobs and veterans were no exception.

The following statistics will show you the current unemployment rate of veterans and how it changed over the last few years. At the same time, we also included a few statistics to show you the occupations and industries that employ the biggest percentage of veterans.

The number of veterans in 2020 was significantly lower than it was two decades ago. Based on the veteran employment statistics, there were 13,531,000 male veterans and 1,034,000 female veterans in the labor force in 2000.

Between 2000 and 2020, a lot of veterans retired so the number of veterans in the labor force dropped by more than 33%.

4. Veteran unemployment rate by state statistics show 11% of veterans in the state of Michigan were unemployed in 2020.

Unemployment rates vary from one country to another. Michigan had the highest percentage of unemployed veterans in 2020, followed by Arizona with 9.6%, Nevada with 9.4%, and Ohio with 9.3%. In contrast, the lowest unemployment veteran rate was in Nebraska with 2.7%, Colorado with 3.5%, and Georgia with 3.8%.

6. Roughly 44% of veterans aged between 18 and 44 were unemployed for less than five weeks.

On the other side of the spectrum, veteran statistics for 2022 show that more than half of veterans have failed to find employment in longer than five weeks. Generally speaking, this might be good news for veterans without jobs, considering the fact that the average length of unemployment is 22 weeks, while the median is 8.2 weeks. 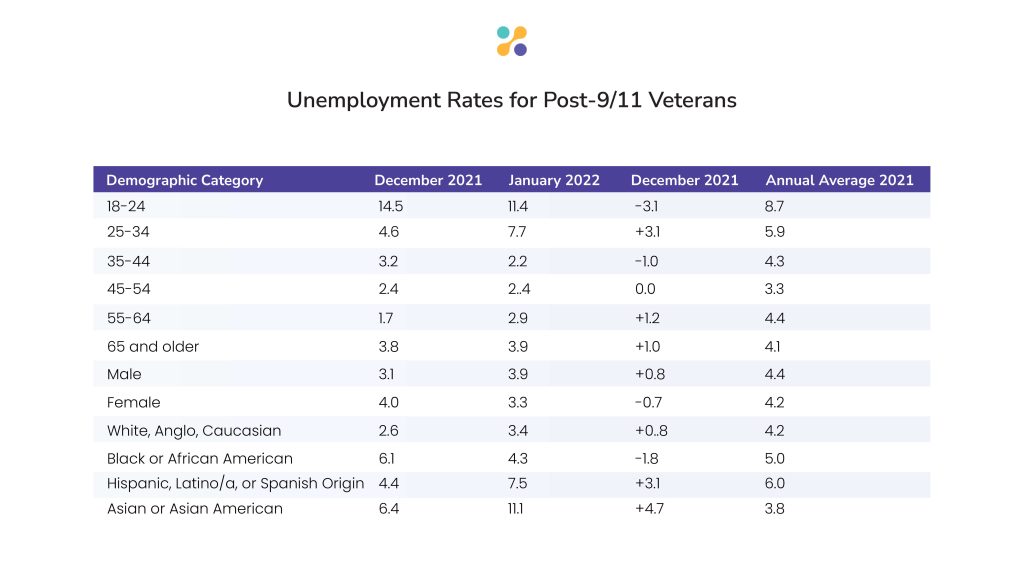 8. Around 11% of all veterans work in the transportation and material moving occupations compared to 7% of nonveterans.

Out of ten major occupation groups, four have a higher percentage of veterans and nonveterans than average. Veterans employment statistics show that 20% of employees in the management, business, and financial occupations are veterans, while only 17% are nonveterans.

9. Approximately 7% of veterans work in the installation, maintenance, and repair occupations.

As far as nonveterans are concerned, only 3% of nonveterans work in the installation, maintenance, and repair occupations. Based on the same data, around 7% of veterans works in the production line of work, while the number is only 5% when it comes to nonveterans.

10. Veterans in the workforce statistics show 33% of female veterans work in professional and related occupations.

In contrast, only 19% of men veterans work in the same field. The concentration of female veterans is also higher in the office and administrative support occupations. Based on the latest data available, 16% of employees in this occupation are female veterans, while only 6% of them are male veterans.

However, in the transportation and material moving occupations, 13% of male employees are male veterans, while only 4% of them are female veterans.

Apart from the employment rate, the pandemic also had an adverse effect on the average veteran salary. The following group of statistics will show you what veterans earned per annum between 2019 and 2022.

In addition, you will also learn more about the best-paying positions for veterans, and find out about the cities where the average annual veteran salary is the highest.

13. Facts about veterans and their salary show veteran men earned around $16,000 more than veteran women in 2019.

However, a pay gap exists in civilian sectors as well, and civilian men earned $18,000 more than civilian women. Based on veterans in workforce statistics from 2019, veteran men earned an average salary of $67,306, just slightly above civilian men who earned $61,909 on average. 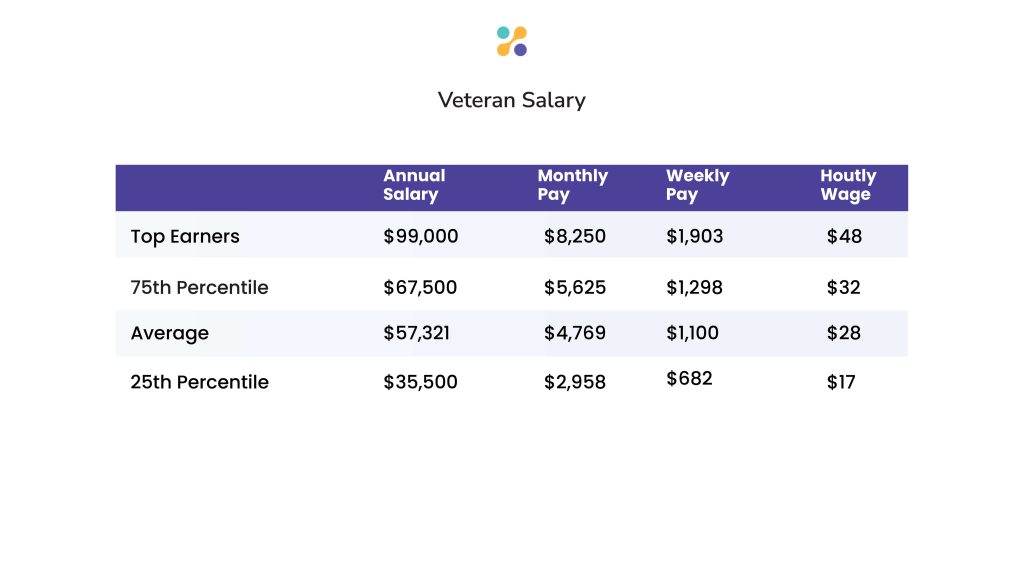 17. Veterans at the assistant veteran military position earn an annual salary of $67,668.

In fact, veterans at this position earn around 18.2% more than the average veteran salary. Other high-paying jobs include director military veteran with $63,674, veterans program with $63,438, military spouse remote with $56,527, and recruit military with $54,965.

The term veteran includes anyone who has served in the active service, be it naval, military, or air service. Currently, the US has millions of veterans of different ethnic and age groups.

The following demographics will tell you more about the unemployment rate of veterans based on their ethnicity and age. In addition, we also included a few statistics to show you where most of the veterans live and which states have the highest concentration of veterans per citizen.

The latest veterans in the workforce statistics indicate that the unemployment rate varies between different races and ethnic groups. Around 7.5% of veterans and 11.5% nonveterans are Black or African American.

The global pandemic caused by COVID-19 had major effects on the US labor force, and veterans were no exception. Veterans statistics show that the unemployment rate was at its highest in April 2020. However, by September 2021, it dropped down to 3.9%, which was just 0.6% higher than the pre-pandemic unemployment rate in February 2020 of 3.3%.

21. Number of veterans by state data shows Alaska has the highest concentration of veterans, with 9,044 veterans per 100,000 citizens. 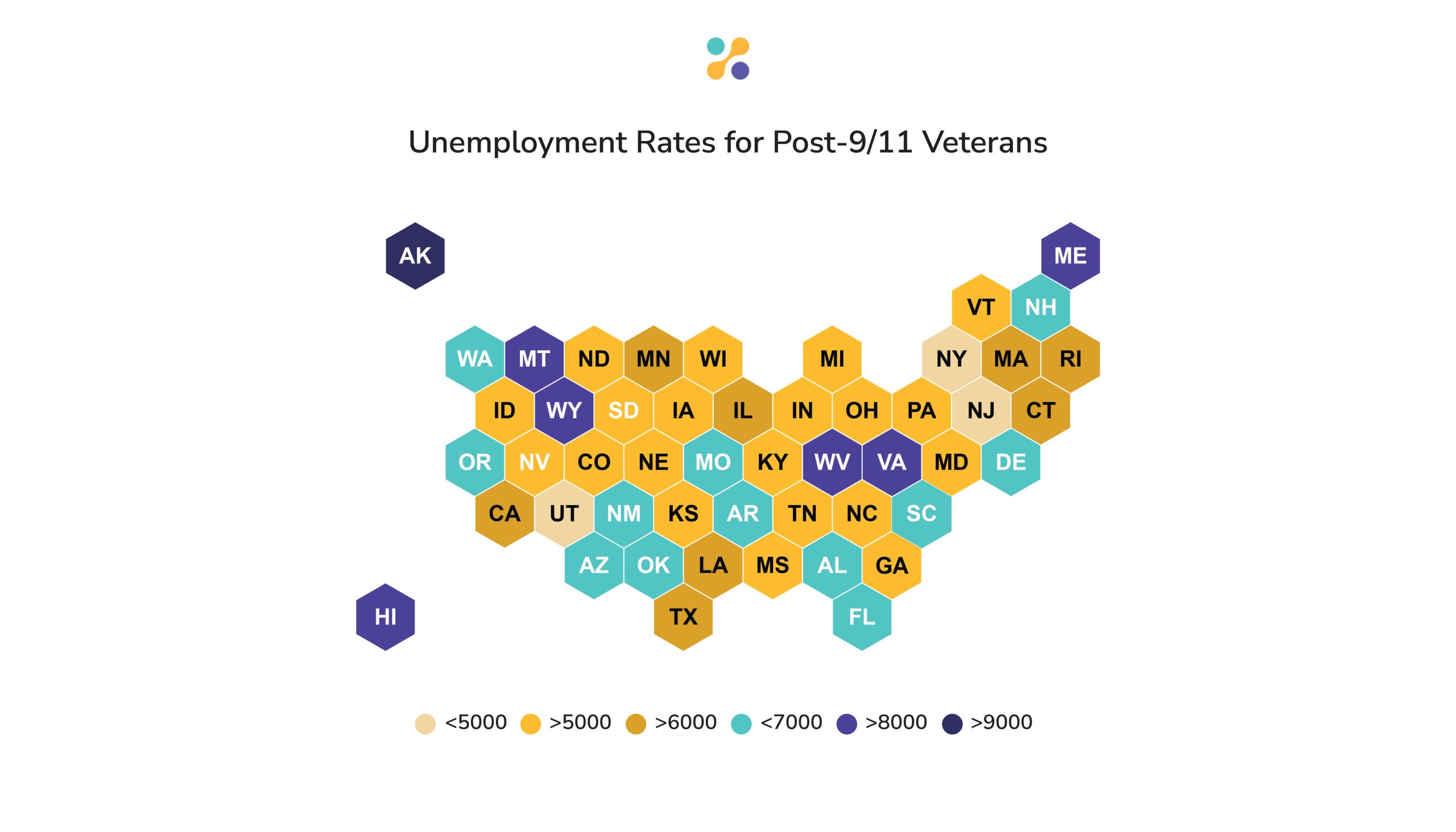 22. Military employment statistics show there are 1,134,548 enlisted personnel in various branches of the military and Coast Guard.

As one of the largest forces in the world, the US has millions of active military personnel, and the number only seems to be increasing. However, once military individuals get discharged or released from active duty, they face numerous challenges when transitioning back to civilian life, especially those with a service-connected disability.

The following statistics will tell you more about what are some of the challenges veterans face, what do recruiters look for when hiring veterans, and the latest veteran disability rates.

24. In August 2020, around 40% of Gulf War-era II veterans had a service-connected disability.

The latest disabled veteran statistics from the US Bureau of Labor show that this is significantly higher than the average numbers, as only 26% of all veterans reported having a service-connected disability.

25. Around 55% of veterans report employment is the most difficult transition challenge.

26. Around 20% of employers rank experience as the main factor for hiring veterans.

Apart from experience, employers also put a lot of value on perseverance and a good work ethic, both of which are well-known traits for military personnel. Additionally, about 17% of employers reported leadership as one of the top three ranking factors for new hires.

27. A high number of veterans in the US (55%) felt HR and recruiters failed to understand their experience.

Landing a job is one of the most difficult transitioning aspects for any veteran. Unfortunately, HR recruiters don’t seem to make things easier for the veterans since more than half of veterans felt like recruiters didn’t manage to assess their work experience or qualifications correctly.

To make matters worse, around 63% of veterans were disappointed with the lack of support they got or rather didn’t get when looking for a job.

Veterans in the Workforce Statistics: The Takeaway

In fact, nowadays, the average unemployment rate of veterans is lower than it is of nonveterans. At the same time, veterans average higher annual wages than their nonveteran counterparts and are often sought-after by employers who value experience, perseverance, a good work ethic, and strong leadership skills, all of which are traits veterans are well-known for.

How much do veterans make a year?

Who employs the most veterans?

According to Statista, around 22.9% of veterans are employed by the government. In addition, 12.2% works in manufacturing, 11.4% in professional and business services, 8.7% in education and health services, and 7.8% in retail trade.

How many veterans are in the civilian workforce?

Based on the latest data available, there were 158.6 million civilians in the workforce in 2020. Out of that number, roughly 8.9 million (5.6%) were veterans. As far as 2022 goes, the latest projections indicate that there are around 163.5 million workers in the US labor force in 2022 and that only 338,000 veterans ages 18 and over were unemployed.

Are veterans more likely to be unemployed?

However, numerous veterans find transitioning from military life to employment in the civilian workforce challenging, and many of them end up working jobs that do not match their qualifications.

How many unemployed veterans are there in 2022?

How many veterans are disabled in 2022?

How many veterans are there in the US?

Based on the latest veterans in the workforce statistics, there are around 19 million veterans in the US. This represents nearly 10% of the total US adult population. Currently, around 89% of veterans are men. However, the latest projection models indicate that the share of women veterans is expected to increase from 11% to 18% by 2046.